We’re just starting work on a set of three dances for the Midsummer Dream Festival on June 22nd. Here’s the kicker; we’re doing them with four legs (each) instead of two. The theme for this year’s festival is Magical and Mysterious creatures. I think I can safely guarantee that you’ll never get another chance to see a pair of centaurs doing vintage foxtrot and tango. Come join us for a fun day—it should be quite a sight!

There’s a new video on YouTube from a recent performance of ours showing a couple of variations of nineteenth-century Waltz, a ragtime Tango (nineteen-teens) and a ragtime Fox’s Trot. It includes some spoken explanation of the dances in the beginning and some talk at the end about how we research what we do but if you’d like to go straight to the specific dances, the description with the video offers direct links.

I’ve also added a link at left to a printable pdf of the Downtown Halls chapter tweaks I mentioned in an earlier post.

We’re dancing at the new Midsummer Dream festival in downtown Lowell tomorrow, complete with fairy wings and a beribboned lantern for a sound system. Since someone is bound to ask us where this dance or that one came from, or what the music was, here’s all the info up front (’cause I’ll be darned if I can remember it all on the fly!)

Childgrove
Traditional English tune and country dance, longways for as many as will. Adapted for one couple (w/skipping omitted for hot weather).
Music performed by Immigrant’s Daughter

Sellenger’s Round
Traditional English tune and circle dance. Adapted for one couple.
Music performed by Estampie

Abbots Bromley
“Abbots Bromley Horn Dance” is a traditional English tune and dance. Here it’s being used as a single line processional for as many as want to join.
Music performed by Jennifer Pratt-Walter and Valerie Blessley.

Greenwood Kalamatianos
“Dans En Dro” is a traditional tune from the Brittany region of France. It’s used here for a participatory Greek line dance, the Kalamatianos.
Music performed by Lothlorien

One more Lothlorien tune may or may not be used for a Mid-Eastern-style taqsim (solo improvisation):  “An Cat Dubh”

When I started writing Twirling Jennies, one of the first chapters I tackled was the survey of downtown dance halls. I mean, gee, that should be nice and straightforward, a list of places people went dancing over the years, right? Hardly. That chapter kept growing until it became the longest in the book and covered 29 sites in only a few blocks of real estate. And even so, I tried to avoid delving too deeply into each hall’s history because I was writing a book about dancing, not buildings. Subsequent research for related projects has turned up minor errors in that chapter. For the accuracy-obsessed among us, including myself, here are the changes I’d be making in any future edition:

page 101: There was, it turns out, at least one dance in the Old Market Building. When the Lowell City Guards opened their office in the building in the mid-1800s, they held a dance in the Market House hall to celebrate.

page 101–102: Monsieurs Pushee and Gee, who invited the public to a dance in the new Appleton Block, were not connected with the Appleton Bank. They were dance teachers renting the hall in the building for their dancing school and were eager to show off their new space. And, while I’d still swear that the name of the band for this event looks like Pushes and Bends Cotillon Band in the old newspaper scans, it appears it was actually named after Monsieur Pushee and a musician named Alonzo Bond. Thus it would be Pushee and Bond’s Cotillon Band—but I still like the other name better!

page 103: In the c.1870 photo looking up Central Street, French’s Bakery and Ballroom were in the second building on the left, not the third. There is an extensive history of this building—and its connection with the Railroad Bank building on Merrimack Street—available at https://twirlingjennies.com/taleof2ballrooms/

page 104: The office for Hibbard’s Orchestra was not at the apex of the junction between Gorham and Central Streets; it was in the Harrington Building, one structure closer to Merrimack Street (the street’s multiple renumberings fooled me on this one). Whatever remains of the Harrington Building has been swallowed up by the current Eastern Bank building.

page 110: I shan’t go into the confusing history of Colonial Hall in detail here, but suffice it to say that the structure now known as the Pollard Building at the corner of Palmer and Middle Streets had two, or possibly three halls on its second floor around the turn of the last century. Two of the halls were Colonial and Middlesex, and the Foresters Club either had their own hall or shared Middlesex Hall and dubbed it Foresters Hall for their gatherings. These halls regularly held dances and were lost to fire in 1926. The building was rebuilt without the dance halls, and the upper floors were eventually removed at a later date.

page 116: The photo of the train depot that held Huntington Hall is from a souvenir book titled “Views of Lowell and Vicinity” published in 1905. But since the building burned in 1904 it’s safe to say the photo is earlier than that.

While doing more in-depth research on Lowell’s Victorian downtown dance sites, I became particularly interested in two buildings, one of which still stands. After months of digging into the history of these buildings and the men who built them, the results are now online: www.twirlingjennies.com/taleof2ballrooms

The Lowell Folk Festival is here and we expect to be out there dancing ourselves silly all weekend. Signed copies of Twirling Jennies are available at COOL Place, 122 Merrimack Street, right next door to El Potro Restaurant and smack dab in the middle of the Festival. Their extended hours for this weekend are 11–7 on Saturday and 12–6 on Sunday.

Also, if you’re a fan of Lowell history, I recommend checking back here in a couple of weeks. I’ve got several pages of additional research and photos regarding three area residents and two buildings (all nineteenth century) that are almost ready to go online.

We’ll be selling books and doing 3 short performances at Mill no. 5’s Otherwhere Holiday Affaire next Saturday.  Loads of interesting vendors, fascinating setting.  Come join us!  The Affaire is from noon to six. 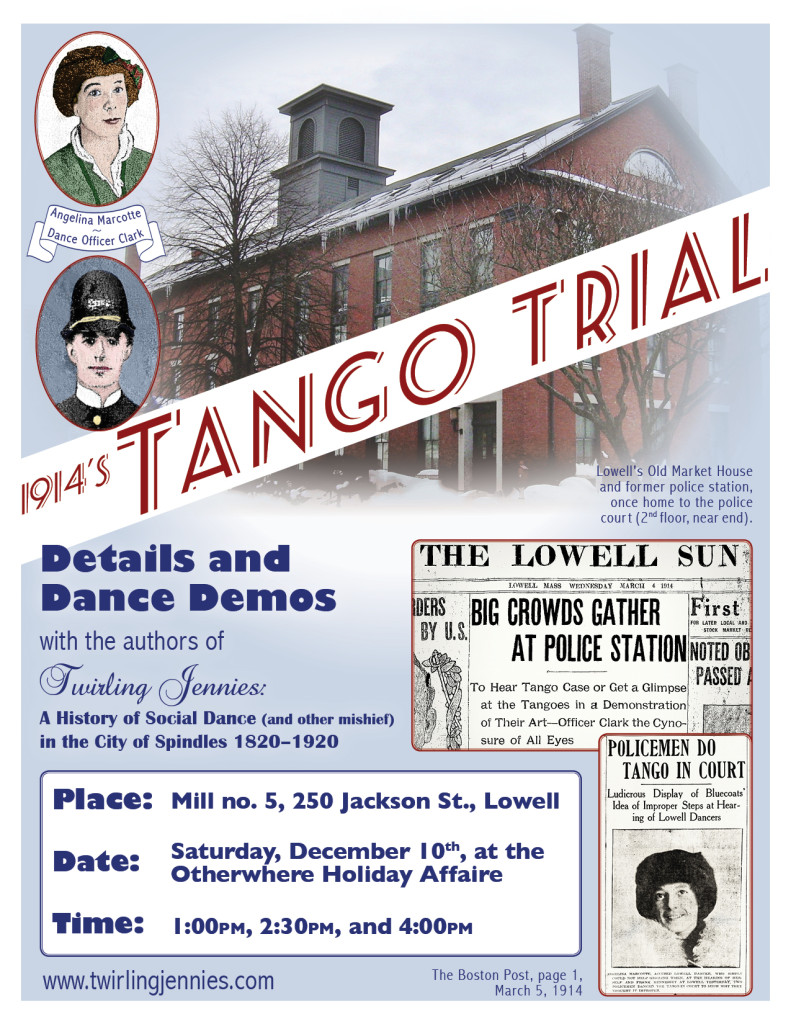 I recently put together a easy-to-follow little tour based on a chapter in Twirling Jennies. I eventually hope to get these brochures printed in quantity and made available at various downtown Lowell locations. In the meantime, pdfs for printing the front and back of a single 8 1/2 x 11″ sheet can be found via the link at left, or you can get to the files directly: https://twirlingjennies.com/dancetourout.pdf and https://twirlingjennies.com/dancetourin.pdf

We’ll be in downtown Lowell at Mill no. 5’s OtherWhere Market from noon to 6:00 on Saturday, April 30th signing (and selling) books.  For those who don’t know, Mill no. 5 is an eclectic mall on the fourth floor of 250 Jackson Street—just follow the signs from the sidewalk to the elevator hidden in the back corner of the breezeway.

There’s a Steampunk theme for the Market this time around and we’ll be doing presentations with demos at 1:00 and 2:30 regarding Victorian and Edwardian dancing in Lowell. 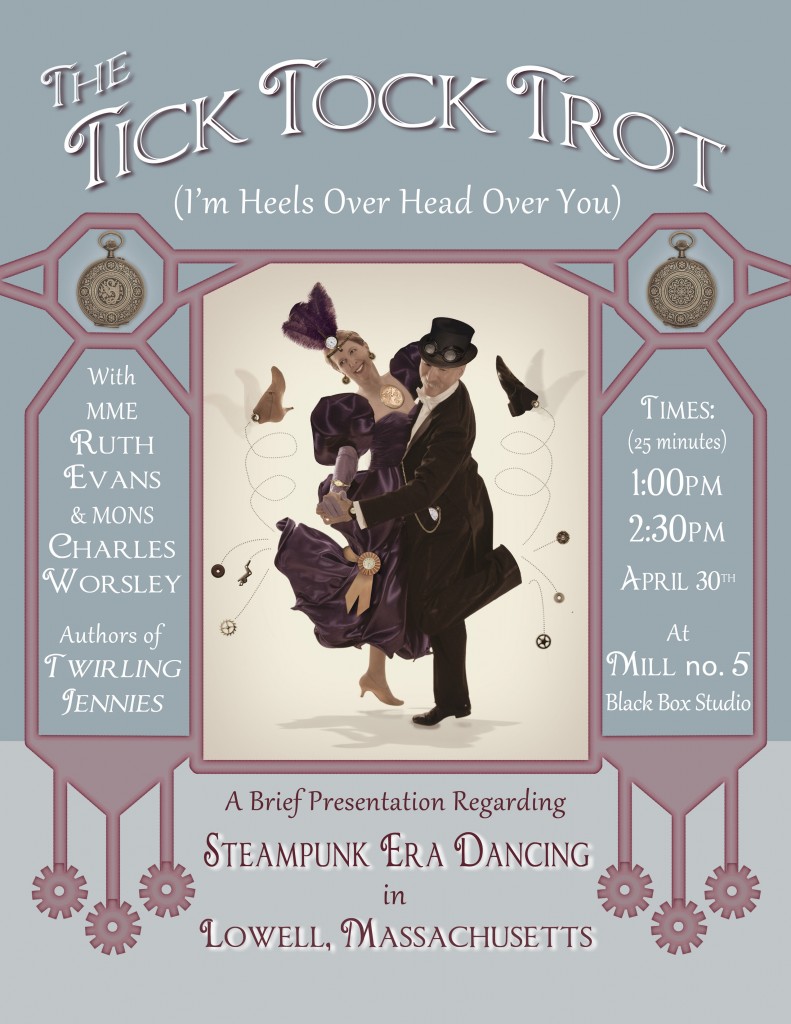